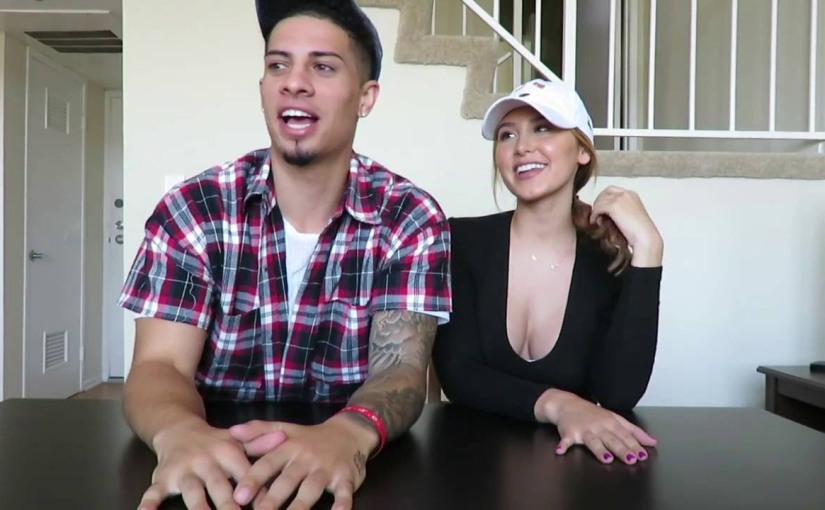 Parents love to post photos of their babies on social media. But is it normal to make an Instagram account for a newborn—and have it garner 1.3 million followers in three weeks?

The ACE Family’s new baby was born three weeks ago. If you aren’t familiar with the ACE Family, the family consists of Austin McBroom, Catherine Paiz, their daughter Elle, and their three-week-old baby Alaïa.

They have 13 million subscribers on their YouTube channel, on which they post incredibly long vlogs about their life as a family.

All of this sounds adorable… but isn’t it a little messed up?

Austin and Catherine started their channel two years ago, where they initially posted prank and challenge videos—and once their daughter Elle was born in May 2016, she also became a feature in their videos.

Let’s be clear: vlogging your life is not inherently a problem. Austin and Catherine both had a strong social media presence before they started making videos, so it’s no wonder that people are interested in their lives.

The problem is that as soon as their videos featuring Elle got more views, they started making her do things—seemingly, just for the vlogs.

Elle is now two years old. She has her own Instagram account with 4.3 million followers, and her own vlogging camera. She knows when she is being filmed, she can work a camera—and although she cannot fully speak, she already tries to say Austin’s introduction to The ACE Family’s vlogs with him.

Because of the success that Elle has brought to her family, Austin and Catherine decided to go one step further when their daughter Alaïa was born in October 2018. They not only include the newborn in their vlogs, but they filmed her birth and made her an Instagram account only two weeks after she was born. The account already has 1.3 million followers.

We’ve all seen the effects of being famous too young—just take a look at Lindsay Lohan, Amanda Bynes, Justin Bieber, and all the other ‘troubled’ celebrities who grew up in the spotlight.

Granted, being in movies or having hit singles seems like a much bigger deal than being in YouTube videos, but The ACE Family’s channel is growing so quickly that they are being seen by millions of people each week.

From social media, Austin and Catherine seem like good, loving parents. Even though their channel has been bringing them a lot of money (Alaïa is not even a month old and she is already wearing Fendi), they often mention that they will never let money change who they are.

It’s clear that the most important thing for them is family, which is probably why they attract such a loyal fanbase—who they refer to as their “family members”. However, they are clearly using their non-consenting children for fame and money.

From the videos they have been posting, Elle seems to be loving the attention. But, will she feel the same way when she grows up?

Due to their fame, she will probably not be able to attend a normal school. Furthermore people on the Internet can be incredibly mean—who knows what kind of comparisons they will make between Elle and Alaïa, and how that will affect their relationship as they grow up?

We can make assumptions on how this attention and fame will affect Elle and Alaïa from history. Mara Wilson, known for her roles in Mrs. Doubtfire and Matilda, wrote an article on why most child stars go crazy.

In it, she explained that although she chose to act when she was little, she knew many child actors who didn’t have that choice, and that it made them resent their parents. She also talked about how hard it is to get used to love and attention and then lose it.

How will Elle and Alaïa feel when the Internet finds a new cute child to obsess over? Or when her family’s channel stops growing? Their parents will be fine, but the girls will not know anything about life outside their little YouTube bubble.

Family YouTube channels are increasingly popular, but it has to be done right. Vlogs are fine (as long as they are not as staged, as some of The ACE Family’s videos seem to be), but making Instagram accounts and posting on behalf of a toddler and a newborn seems to be taking it too far.

Do you think that The ACE Family’s content is harmless, or lowkey messed up? Let us know in the comments.

I'm passionate about vegan food and pop punk. View all posts by minniegaio